This past week has been a difficult one for those of us who are long-time residents of Lorane. One of our own special people who was raised in Lorane and went to school in the Lorane and Crow schools was admitted to the intensive care unit at McKenzie-Willamette Hospital.
Following graduation and the military, Bud White moved to the East Coast, married, and raised his family there, but always kept in touch with his Oregon roots. He returned to Oregon about 5 or 6 years ago and settled in Eugene.

After being admitted to the hospital, his sister, Jodie Smith, began posting daily updates on his condition on Facebook which I shared on the Lorane page. Bud was diagnosed positive for the Covid-19 virus and was soon put on a ventilator. Love, prayers and special memories were sent to Bud and his family as we followed his progress/regression through the days. We cheered as Jodie reported that he had been taken off of the ventilator and was able to breath with the help of a BiPAP machine, but his lungs were not able to take in enough oxygen, so he was ventilated once again. Sadly, his quiet passing on May 3 was announced with Jodie’s words:

“It is with a broken heart that I must update you all about Buddy’s evening flight to heaven. It went smoothly and as easy as can be. He was blessed to have loving care at McKenzie Willamette Hospital including the beautiful people who comforted his wife Myrtle, daughter, Anne Melien, and grandsons Joey, Zack and Jaylin. They all shared his final moments.” 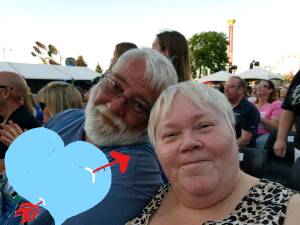 In the photo that she shared of Bud and Myrtle, Jodie pointed out “the kind eyes and smile that reflect the generous, wonderful, loving, hard-working and devoted person that Bud practiced being in every step of his life. To find a more kind, gentle, loyal, brave and patriotic friend, family man, volunteer fireman, veteran and pure-hearted soul is a feat in and of itself.” Celebration of life plans will be announced as soon as they are known.

Our condolences go out to the White family including his sister, Jodie, of Eugene and his brother, Corky, of Lorane.

The Territorial Highway Project at Stony Point north of Lorane is entering a new phase. This week’s newsletter informed us that, beginning on/or about May 10, the travel route over Stony Point will be a gravel surface. “The traveling public is encouraged to use alternative routes. People driving should drive slower through the area and motorcycles and bicycles should use extreme caution.”

The Lorane Grange has tentatively set its annual Grange Cemetery Clean-up for Thursday, May 13. Those interested in becoming grange members or volunteering to help with the project are encouraged to contact Lil Thompson at 541-942-5701 for more information.

Vendors are being sought for the upcoming Applegate Regional Theater’s Community-Wide Yard Sale to be held from 9:00 a.m. to 5:00 p.m. on the theater grounds (the former Central Elementary School) at 87230 Central Road—the corner of Central and Fleck Roads—between Eugene and Veneta. It’s 2-miles south of Fern Ridge Lake at Perkins Peninsula and sits next to the Central Grange. To reserve a 10′ x 10′ space, email art-inc@hotmail.com. The current COVID-19 protocols at that time will be observed.

It’s good to see some activities beginning to blossom again in our communities.

So far, one week into the month, April’s showers have been sharing time with some spring sunshine, and it is so welcome. We have been spending time outside, trying to get a handle on the new green grass in our lawn and the prolific weeds that are growing in the flower beds. Both are competing for our attention with the voles and moles that have decided to take up residence and leave their holes and hills where we don’t want them. 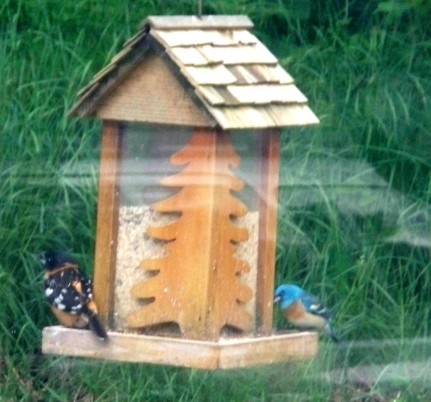 A Black-Headed Grosbeak and a Lazuli Bunting at our feeder about 5 years ago.

In addition, I’ve put up my bird feeders to try to tempt the birds to stop by to visit and dine as they come back into the area. Right now, a few house finches, sparrows, juncos and chickadees are sampling the seeds from the feeders and the mourning doves are picking it up off the ground. Soon, the grosbeaks will be arriving as well as the goldfinches, blackbirds, vireos (occasionally), and so many others. For many years, the beautiful, brilliant blue and orange lazuli buntings arrived like clockwork every April to check in at the feeders. They would stay around through the summer until it was time to head south. For some reason, they stopped coming about 4 years ago. Oh, how I miss them.

Another April event is beginning this week. Lane County is set to resume the construction at Stony Point of the Territorial Highway project north of Lorane on April 12. They’re beginning to move in the heavy equipment now. According to Becky Taylor, Senior Transportation Planner with the Lane County Public Works Department:

“The public will be able to travel through the area, but flaggers may delay or hold traffic up to 20 minutes at a time throughout the summer… The public is encouraged to use alternate routes where possible and to travel safely.

Principal Rodemack of the Crow Middle/High School reports that the newly-instituted hybrid schedule at the school is running smoothly. “Our students have been great in following Covid protocols and being safe. This time is so important for us to demonstrate to the state that schools can be safe so that we can return more and more to a normal school setting, especially for next year.”

The volleyball season was quite successful and they are looking towards the beginning of track, softball and baseball. According to Principal Rodemack, however, they have had few students sign up to participate so far. “We need a certain amount of athletes to field a baseball and softball team and we would love to have both of those sports back at Crow. Track also has a strong tradition at Crow, but our team is quite small at the moment. We encourage students to sign up and participate in sports this year. Experience doesn’t matter, and it can truly be amazing to participate and get to be involved with your school. Please come to the front office and let us know if you want to participate.”

The Lorane Grange meets next on Thursday, May 6 at 7:00 p.m. At that time they will set a date for the annual Lorane Grange Cemetery clean-up. The beautiful old cemetery sits at the top of the hill next to King Estate and is maintained by grange members and community members who want to help. Let them know if you are interested.

May has arrived, my flower beds and boxes are taking shape, and the pace of life is obviously speeding up a bit for everyone. With the sunshine and warmer temperatures, there is suddenly the desire to get out and “do something.”

At its meeting this past week, the Lorane Grange discussed the annual booth at the Lane County Fair as well as its spring clean-up of the Grange Cemetery which sits on the hill next to King Estate. I know that they will welcome volunteers to help with the cemetery. Contact Gary or Lil Thompson or any other grange member if you would like to participate. I’ll try to include details in next week’s column.

For those of us who love and care for our “Lorane Warrior,” Michael Matchulat, he could use a few more of our thoughts and prayers at this time. Jim and I are sending ours.

Last Wednesday morning, there was a very interesting event taking place at Crow High/Middle School, but it was one I opted to find out more about after-the-fact. They held a pre-prom assembly that strangely held a bit more meaning to me than it normally would have. Outside the school, a real-life re-enactment of a horrific car crash took place. Two cars were involved in what was described as a car-full of teenagers who had been drinking, on their way home after the prom. The other car had adults in it who were unlucky enough to have been in the wrong place at the wrong time. The scenario involved real-life paramedics, ambulances and life-flight crews who were on hand to remove and tend to the passenger casualties from the wreckages.

The roles of the passengers were played by school students and teachers… among them, our daughter, Michele Kau. Each one of the role-players were made up to show specific injuries and conditions. From the pictures I saw, there was lots of “blood” and makeup to show “wounds” and “broken bones.” I understand that it was very realistic and, according to Michele, “It impacted a lot of kids in a way that will hopefully make them think twice about making dangerous choices.”

I applaud the school for providing this wake-up call to its students. The reason I decided not to witness it was fairly obvious… it was gruesome… but what clinched the decision was the fact that I could not bear the thought of watching the “jaws of life” extricate my daughter’s supposedly “dead body” from a crumbled wreckage. That just hits too close to home.

On a sunnier note, I have been noticing, this spring, an unusual abundance of beautiful blue flowers in the pastures around Lorane, probably due to our recent flooding—they like to grow in moist meadows. These flowers are the blue camas, and they were a very popular and cultivated food source for the Native American tribes who lived in this area. After being harvested in the spring and early summer months, the bulbs were pit-roasted or boiled. According to Wikipedia, “A pit-cooked camas bulb looks and tastes something like baked sweet potato, but sweeter, and with more crystalline fibers due to the presence of inulin in the bulbs…” 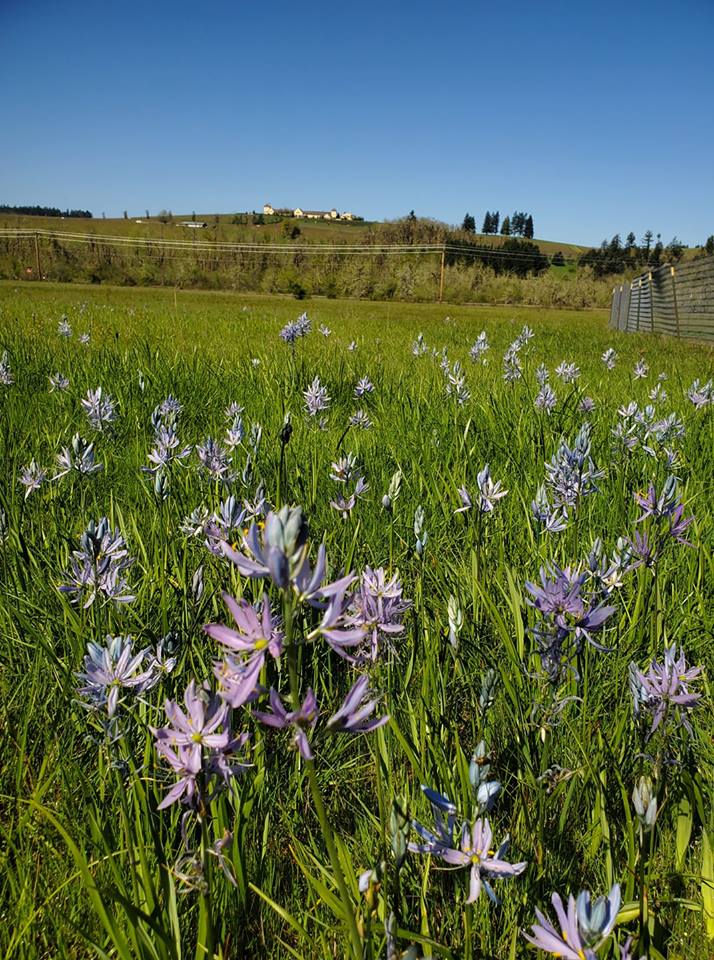 Photo by Martin McClure of Lorane

Seeing these beautiful flowers in the fields provides a connection to the past for me.

A Bit of Lorane History

“The nearest tribes in the area were the Chelamela, the Yoncalla Kalapuyas, the Siuslaws, and the Lower Umpquas. All spoke Chinook jargon, made up of 500 words, which evolved from the various tribes. Primarily, they had the same type of life-style. Their chief food sources came from the abundant plant and animal life in the Siuslaw Valley. Their main staples were acorns, hazelnuts, camas, fish, roots, game and berries. The local tribes regularly practiced field burning to harvest dried wild wheat pods and to control the growth of vegetation. They took advantage each fall of the plentiful supply of salmon provided during the salmon runs in the Siuslaw and Smith Rivers and the connecting streams…

“…Each spring, the members of the tribes would often leave for their favorite hunting or gathering grounds, living in temporary shelters all throughout the spring and summer months. There were no strict territorial boundaries between the tribes and most seemed to agree that no man should own the land, and they respected the areas where their neighbors dwelled…” (From Sawdust & Cider, 1987, 2006)