Well, I feel like we’re living in Oregon again. This spring, with all of its spring rains interspersed by a few warmer, sunny days, seems familiar. We haven’t had one of these in awhile and although I’m not a huge fan of long strings of wet, rainy days when I’m wanting to get out and work in the yard, I’m thankful that maybe this might mean that we won’t be experiencing drought conditions this summer. Fingers crossed.

Yesterday, it was 73 degrees and I ventured outside in shirt sleeves to clean out the bird feeders I had left out over the winter. I brought them in, cleaned them up and took them outside again for the birds that I knew had been waiting for them for quite some time. I really neglected my little feathered friends this year, I’m afraid. It didn’t take them long to find the feeders and there were a lot of Black-headed Grosbeaks, House Finches and Sparrows enjoying the fresh food this morning. I need to get my hummingbird feeder out today.

For me, and for many of my friends, one of the biggest perks of being on the verge of becoming an octogenarian is the joy that having so many young great grandchildren, living close-by, brings to our lives. The transition that comes with aging and, in our case, the sale of the business that we had for over 44 years, has seemed a bit difficult to transcend. Accepting the limitations that infirmities put on us as well as dealing with the times that we are living in is not easy.

But fortunately, several years ago, with the arrival of our first great-grandbabies (they now number 12), I turned one of our extra bedrooms into a playroom for the littles. I equipped it with a miniature bright-blue card table with red, blue, green and yellow folding chairs for putting puzzles together or looking at books. They also have a well-used easel with a blackboard and eraser on which they practice their writing and artwork and I’ve filled it with toys and stuffed animals that they love to play with. Their favorites are an antique wooden dog pull toy that has obediently followed each of the kids around the whole house over the years; then there’s the toy “popcorn-popper” on wheels that is pushed over the same routes. “Rock ‘n Roll Elmo” and Gi-Gi, as they all call me, have taught many one year olds how to dance along with Elmo’s music to be had with a push of the red button. They’ve learned to fit stars and squares and ovals into the correct holes in a plastic ball while honing their hand-eye coordination skills and watched their little battery-operated car bump into Gi-Gi’s toes. Papa (Jim) has a fitness vibrating deck that they love to stand on while listening to their little voices, singing and vibrating “Aaaah…!” Giggles are contagious.

Because each of our littles have multiple grandparents and great-grandparents, Jim and I are “Gi-Gi” and “Papa” to them—or more correctly, for a couple of them, we are now combined to a singular “Gigipapa.” We’re told that when passing our house or even the intersection that leads to our house in a car, they point to it, exclaiming “Gigipapa’s house!”

While on a weekend outing to the coast with his family, our little great-grandson, Hudson, who won’t be two years old until late July, surprised his parents by pointing out every car in the parking lot that had a Ford emblem on it—and even as they passed a Ford dealership in Newport—by excitedly saying “Gigipapa!” We have a Ford Edge, so apparently all things Ford are “Gigipapa” in his eyes.

So, our blessings are spilling over the top. Those big smiles and excited hugs we get in greeting from each of them as they come over to visit before heading straight back to the playroom, make up for so much of the other “stuff” of life. 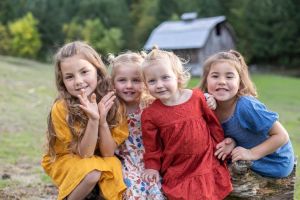 Kai and Landon Mulder (with parents, Bethany and Cameron Mulder)

And, for those who have been wondering, Jim and I—just the two of us—have made plans to fly to Boston in late September where we will take an 8-day “Fall-color” bus tour of the New England states. It’s a first step in the beginning of our full retirement, and we’re going to make the most of it, by golly, knowing that there will be a lot of hugs waiting for us upon our return.