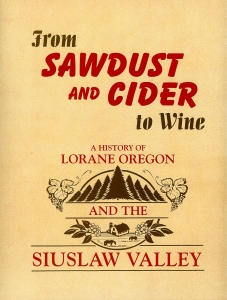 I’m going to cheat this week and share with you a couple of passages from our book, From Sawdust and Cider to Wine. While trying to remember what would fit with the season, I thought of lady’s slippers, an orchid-like wildflower that grew—and probably still grows—in the spring in the forests around Lorane that was mentioned in interviews we made in our research.

FROM “The Gowing Family History”:

“Reta and I always liked the Spring and could hardly wait to find the first Wood Lilly or Blue Bell. Then came the Spring Beauties and the Lambs Tongues. Then in late March, the Lady Slippers would be out and our mother went with us upon the hill in the fir trees with a 2-pound cracker box and we filled it with Lady’s Slippers. We always had one that was pure white, and it was always exciting to see if it would bloom each year. It usually did.

FROM “The Way of Life: Growing Up in Lorane” chapter…

“Being a child 50-or-more years ago in Lorane was somewhat different than it is today. There was usually more physical responsibility put on the youngsters in the way of work and chores that they were expected to do each day. But, in turn, it seems that the pressures put on them mentally, emotionally and socially were less than they are now.

“It is true—Grandad did have to walk long distances to school. Many times there was no other way to get there. Each child was expected to do daily chores and to contribute in any way they could for the good of the family.

“Various jobs that children in Lorane took on in order to earn some money of their own included trapping for fur, peeling chittem and working in the orchards.

“Chores for girls usually centered around housework with large amounts of ironing and helping to take care of the younger children of the family. Boys helped with the outside work, feeding livestock, chopping wood and mending fences. They did a lot of hunting and fishing to help feed the family, also.

“Lorayne Kotrc and her brother Rodney Dillon always enjoyed walking in the woods when they were kids. Lorayne told of the times. “I don’t know why we kids didn’t get lost, because we always roamed these hills around here when they were all virgin timber. Folks never said anything just as long as we didn’t get too close to where they were falling timber. We’d take a sandwich and take off to the brush. It was pretty clear under the trees – not too much undergrowth. It was old growth and the small stuff was all killed out. It was pretty. We used to pick Lady’s Slippers and take them to town and sell them for a nickel a bunch.”

“George Damewood remembers that he used to earn money for school clothes by peeling chittem bark. He and a friend would take saddle horses into the hills, peel the bark, put it in sacks and tie the sacks together and throw them over the horse’s back. They took it to town and earned four cents per pound for it.

“Willard Gowing remembers only getting 1½ cents per dry-pound for his. He was lugging his sack full of chittem bark home one evening when he came to a fence bordering the road. He threw the sack over the fence and prepared to climb over when he heard a car approach. Not wanting to be seen, for some reason, he hid in the bushes until the car passed. Instead, Eddie Farman drove up, spotted the sack, stopped, looked inside, threw it in the back of his car and drove off. Willard had a set-back in his first million that day.

“Cooking took a good deal of time for mothers and their helpers. Large meals were usually fixed three times a day for the huge appetites of the men who worked on the farm and in the woods, and much canning had to be done each summer to help get the family through the winter months…

“Childhood was not all work, however. There was much time for fun and recreation. Swimming holes were put to good use on hot summer days, and snowball fights and sledding were popular ways of working off excess energy in the winter. There were no televisions, stereos, VCRs, DVDs, movies, discos, or much money “back in the old days,” but neither were extreme pressures put on the youth of yesterday as they are today.”  – From Sawdust and Cider to Wine; A History of Lorane, Oregon and the Siuslaw Valley (2006) by Pat Edwards

Fortunately, most of us have sweet memories of our childhood. During these difficult days, sometimes it’s nice to remember them and try to pay them forward whenever possible.