Surprise, surprise! I got up this morning and headed for the utility room to feed our cats. I prepared the food for Xena, our outdoor cat, and promptly opened the door to the covered back deck where she eats and was greeted by a blanket of white. I hadn’t even looked out the window yet, so I was totally caught by surprise. That’s what I get for expounding on the approach of spring in last week’s column!

Today, I’m absolutely stymied as far as a column is concerned, so I’m going to give you an excerpt from my book, From Sawdust and Cider to Wine, about the former Lone Cedar School.

A Bit of Lorane History – The Lone Cedar School 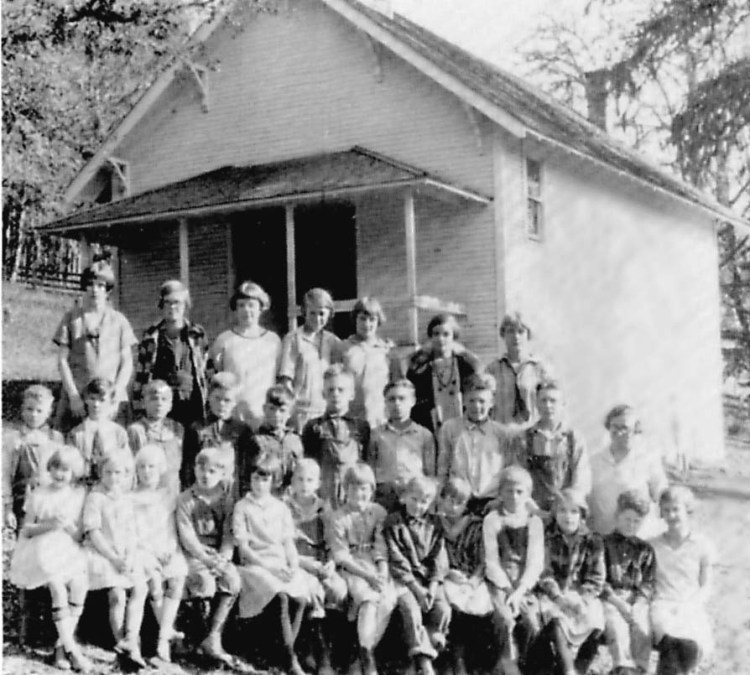 “School District #184 was formed in 1916 because it was difficult for the children living near Gillespie Corners to attend either Green Door School to the south or Hadleyville School to the west. They were a considerable distance from each, and no school buses were in operation at the time.

“The Lone Cedar School was located across Territorial Road from the forks of Simonsen Road near Gillespie Corners. The land was donated for the school by Jesse Hooker and Marcellus Gillespie, and the school house was built in 1918. Classes were held in a one-room woodshed on the property for a couple of years before that, however.

“The school was named for a large, beautifully shaped cedar tree which still stands today between the forks of Simonsen Road. It no longer is beautifully shaped, however, thanks to the Columbus Day Storm that hit the area in 1963.

“Arvid Rothauge had a vivid memory of teacher, Tom Clark. The Lone Cedar teaching job was Clark’s first. When the school superintendent hired Clark the spring before he began, the students were warned about the teacher who wouldn’t let any of them get away with any foolishness.

“Because Clark had spent the summer in Alaska, the students were not given a chance to meet this “superhuman” teacher until the first day of school. Much to their surprise, Tom Clark was a ‘wiry, spindly sort of chap,’ shorter than many of the older boys in school. Before any of them could get any ideas about trying to put something over on their teacher, however, Tom Clark drew the four biggest boys in the school aside on the school ground and offered them a challenge. He lay down on the ground and told the boys to try to figure a way to keep him from getting to his feet.

“‘We thought we’d have some fun with the teacher,’ said Arvid, ‘so we all got squared away – one on each leg and arm. We had him sewed down just to a fare-thee-well, you know. We weren’t supposed to hurt him, though.’

“When the boys told him that they were ready, he literally burst up from the ground, tumbling boys all around him.

“‘He never had any trouble with us after that, and everyone liked him from the start.’