I missed telling you about the February Lorane Movie Night event that was held last weekend. It sounds like it was a good one, and I apologize. The two movies were “A Farewell to Arms” (1932) and “A Brideless Groom” (1947), but the big draw was that it was also a Valentines Chocolate Potluck as well.

Just to make sure that you know about the March event, I’ll list the info now. On Saturday, March 11, the last movie of the 2016-2017 season will be shown. It’s a John Wayne movie entitled “Angel and the Badman” (1947) and will be accompanied by a skit by the Crow High School Drama Club. If you get a chance, plan on attending. The movie nights are held between October and March each year at the Lorane Grange. They are great events with good food (soup and salad dinners), good movies, and great people to enjoy the popcorn and camaraderie with. More info can be found on the Rural Art Center’s website at https://www.ruralartcenter.org/movie-night

Do you like to sing? Would you like to sing in a choir? The Lorane Christian Church is planning an Easter cantata and invite anyone who would like to join them. Ages 10 and up are encouraged to participate. Practice times will be worked out when they know everyone’s schedules. If you are interested, give Heidi Rusten Langstraat a call at 541-556-6223 or send her a Facebook message. 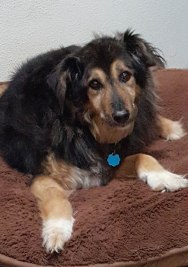 This past week has been a very difficult one for me, personally. It’s been a week of changes, both heartbreaking and renewal. Jim and I lost our Shortie who, for 16 and a half years, was my constant, loyal companion, walking buddy and devoted friend. His quiet presence was always there for me when I felt the need get away from a turbulent world for a short while, at least. I’ve known for a long time that his time would be coming soon, but I always felt that when that time came, he would let me know. He let me know last Saturday night/early Sunday morning. Jim was already asleep and had an early day the next morning, so I called Gloria shortly after midnight; she called her sister, Michele, and the three of us made that trip to the emergency vet with Shortie. Everyone who has pets can identify with the pain one feels about making a decision to say goodbye to a special member of our families, so I won’t go into detail, but as each of you know, it was incredibly hard. Thank you, my sweet, wonderful daughters for helping me through the ordeal. It was such a special gift to not only Shortie, but to me, as well. 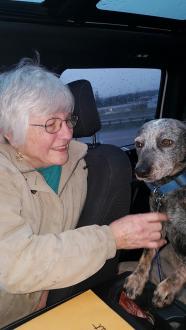 Remarkably, two weeks before, I had found a young, 8-month-old rescue puppy on-line that we applied to adopt so that he could join our family in time to pick up some pointers from Shortie. He was to be shipped from San Diego where he had been abandoned and taken to a high-kill shelter before being rescued by an Oregon rescue group. Six hours after saying goodbye to Shortie, with little sleep, my bloodshot, swollen eyes and a raging headache Gloria and I picked up our little Toby.

He is a small size (mini or toy) Queensland Blue Heeler and he was very scared after the long trip in a van with about 30 other dogs in crates. He snuggled down into my arms as Gloria drove us home. Since then, Toby has provided a distraction and the quiet and sometimes exuberant love that I needed at the time and in so doing, he formed an immediate bond with not only me, but with Jim, as well.

I think Shortie would have approved.