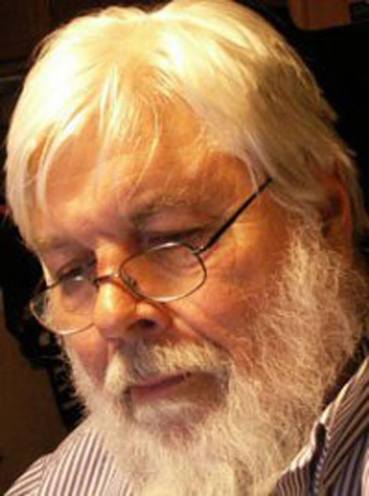 My brother, Jim Burnett Sr., aka Jimminy Cricket in Groundwaters, is dying. He’s in the end stages of terminal esophageal cancer and has been told he has only a short time remaining.

Yesterday, my sister Barbara (I call her B.J.) and I drove to Vancouver where Jim and his wife Jonni currently live, to spend some time with him. He is no longer able to eat or even swallow and has not eaten anything considered “food” in about 2 weeks. He’s been existing on ice chips and up until yesterday, occasional sips of warm tea. Yesterday, the tea would no longer go down.

Despite all of that, we spent those seven hours talking, laughing, crying and sharing portions of our lives together that we have either kept hidden or have just not shared until now. Most of the talking was done by Jimmy. He seemed to need to open up and talk about his life and the parts of it that he has carried with him during his 81 years… his blessings, his regrets, his feelings of inadequacy, his proud moments, his sorrows and above all, his love for us, his family, and the many friends he has gathered over the years.

He talked about his frustration that none of us get a chance to take part in our own celebrations of life, and how he is reaching out to as many of his special people as possible via phone calls and emails to touch upon these special relationships one more time. He showed us pages of printed email messages that have begun to pour in to him from former co-workers, people whose lives he touched as a minister, and others he has not seen for some time. He sent them messages, telling them how each has touched his life in special ways and, in essence, to say goodbye.

Jim shared with us not only his acceptance, and even, excitement, of the journey he is about to take—“It’s time to set out on a new adventure.”— but also admitted to his nervousness about the actual process of dying.

Next Tuesday, he will be moving into a beautiful hospice center located close to his and Jonni’s home in Vancouver where he will be lovingly attended to until he is called home.
Just before B.J. and I wrapped ourselves in his wonderful hugs and said our “See you laters!”— not “Goodbyes”—he began to ask me to send word to our Groundwaters family of his great appreciation for the experiences that Groundwaters has given him over the years. While trying to get the words out, he broke into tears. Taking on the persona of Jimminy Cricket in the “Philosopher’s Corner” of each quarterly magazine and now the annual anthologies gave him a voice and a connection to each of you that he has long carried in his heart.

The only gift I brought to him yesterday, besides my presence, was the newly published 2018 Groundwaters anthology which he lovingly looked through as soon as I presented it to him.

I know that he would love to hear from any of you in a message sent to his email address of dadburnett13@gmail.com. In that way he can feel that he is participating in his own celebration of life.

Thank you all for your kind words to me and the concern that you have shown for his well-being. He’s in good hands.

Awww… this has been a week of much-needed rest… well, maybe that’s not the right word. It’s a week where I have been able to stay at home—no meetings!—sitting in front of my computer while trying to catch up on a large backlog of emails.

Last Wednesday was also the deadline for submissions for the 2018 Groundwaters anthology which Jen Chambers and I have been producing for the past 4 years. Before that it was in the form of a quarterly magazine that was published and distributed through this area for over 11 years.

We have enough amazing material to produce this fourth anthology. My brother Jim Burnett, Sr. (aka Jimminy Cricket), who was a major part of our Groundwaters family for many years before his health forced him to retire has been helping us to read and review the submissions. He’s baaack!… Jim’s recently been diagnosed with cancer and spends 3-4 hours daily for a week at a time, having his chemo “cocktails.” Reading the entertaining stories and poems gives him a much appreciated escape. There are many talented writers in the area who are willing to share their stories and poems with us and they are the reason for Groundwaters’ success. For the past 3 anthologies, there have been over 60 contributors published in each one.

The unveiling of the Lorane mural went very well on Sunday, August 12. Karen Pidgeon and Alix Mosieur received the respect and appreciation they so richly deserve. We estimated there must have been at least 100+ people in attendance. The day was windy and the drapes covering the mural were clothes-pinned together to keep everyone from getting an early “peek.” After I finished my reading, long-time Lorane residents, Bruce McDonald, Gary Thompson, Jim Edwards and Jim Bailor removed the drapes to reveal the gorgeous legacy that Karen, Alix and the Lorane Community Association have provided our current and future residents. You really need to stop by the Lorane Family Store and see it in person. Photographs just don’t do it justice. 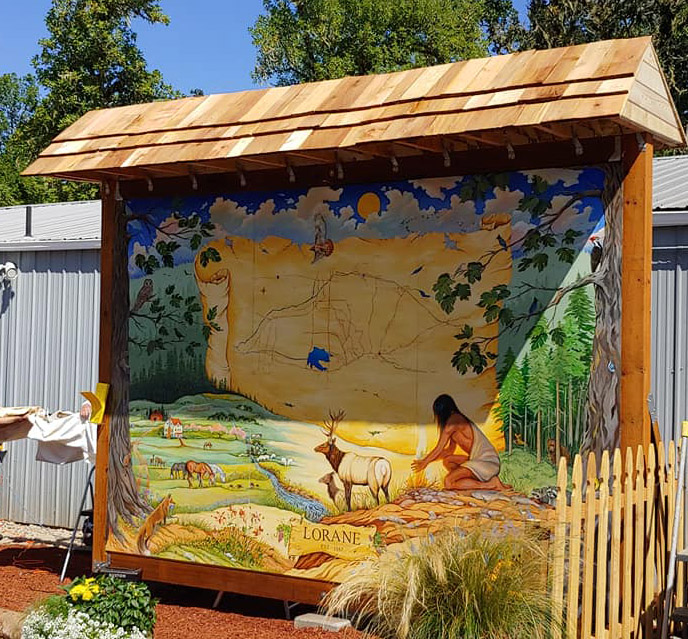 Sunday morning, I attended a baby shower for our granddaughter, Linsey Kau Haxby, so I wasn’t able to attend the Lorane Community Potluck or the Ice Cream Social, but Jim and his brother, John Edwards, went up to the potluck and enjoyed the great food and visited with others from the area. It was a rather small turnout, but it’s hoped that more community members will take part next year.

Lil Thompson reported that a large number attended the annual Lorane Fire Department’s Ice Cream Social in the afternoon. “Many enjoyed the dunk tank, the bounce house, fire truck rides, rides in the EPUD bucket lift, the water hose challenge, the music provided by Kyle and Jim and, of course, the delicious pies and ice cream.”
The cooler weather this past week has been so very welcome. I have a sensitivity to sustained, direct exposure to sun and heat which I probably developed during the many years I helped Jim in the hayfields, driving the tractor—sans umbrella or air conditioning. I recently pushed my luck during the Art in the Country Festival and again when I was shoveling bark chips around the mural in preparation for the unveiling.

Fortunately, the mural was outside our store, so when I began to feel overheated, I was able to go in and sit in the walk-in cooler for awhile. Such a perk!