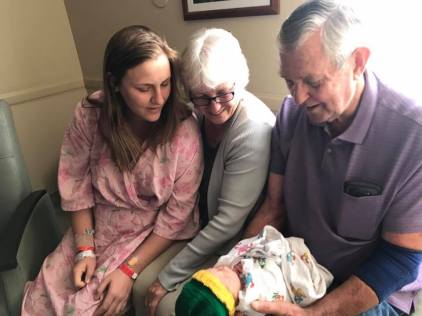 Before I get back to writing my column for Lorane, I want—need—to announce the arrival of Jim’s and my newest great-grandbaby. Our granddaughter, Linsey Kau Haxby and her husband Brent announce the birth of Sawyer Scott Haxby who was born on October 2, at 8:04 p.m., weighing 7lbs 4oz. and 21 3/4 inches long. Of course, he’s perfect! Sawyer is an anomaly in our family—he’s male. We have populated our family with a large number of strong, beautiful, bright and caring fe 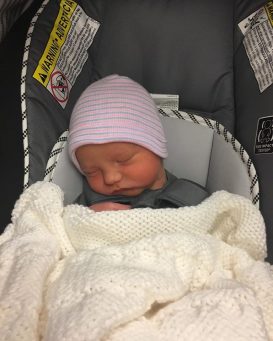 males through three generations now, but the males of the family, while equally strong, bright, handsome and caring, are a rarity. We’ve averaged one for each of the three generations that Jim and I spawned. Sawyer is the first of his generation, joining our son Rob Edwards and grandson Kevin Stevens, and it will be interesting to see if others will follow. He has a little cousin on the way, due in early December. Whatever the gender, she or he will be cherished.

Now, I suppose I’d really better get everyone caught up on the upcoming events scheduled this month in Lorane and Crow…

Saturday, October 13, begins the first Lorane Movie Night showing of the 2018/2019 season. The featured movie is “Bend It Like Beckham” (2002). It’s described as a romantic comedy where “the daughter of orthodox Sikhs rebels against her parents’ traditionalism and joins a football team.“

Each monthly movie night begins at 6:00 p.m. at the Lorane Grange with a homemade soup and salad dinner, followed by fun and games at 6:45 p.m. before the movie begins at 7:30. A suggested donation is $7 for adults and $5 for children, 12 and under.

A reminder: The Crow community is holding a fundraiser for Crow High School graduate, Cody Tripp, who is taking on his second battle with cancer. A dinner is being held on Saturday, October 27, from 4:00 to 7:00 p.m., at the Crow Grange. Check the Lorane and Crow Community Facebook pages for more details.

The Lorane dinner and bingo night sponsored by the Lorane Grange will begin its fall season on Friday, October 19. I believe that the dinner will begin at 5:30 p.m. and bingo will get started at 6:30.

We’ve just completed the 2018 Groundwaters anthology. We are doing the last proofing at this time and hope to publish it by early next week. We will once again launch it at a special program called Groundwaters LIVE! to be held on Sunday, October 21 , tentatively at 3:00 p.m., at the Applegate Regional Theater on the corner of Central and Fleck Roads, north of Crow. Ten of our 70+ contributing authors will give 5-minute readings from their works. Refreshments will be served and anthologies from all four years will be available for purchase.

We wish to invite the community to join us. This year, we are including some of the poems featured in the first issues of the Groundwaters magazine begun by Judy Hays-Eberts in October 2004. They will include poems written by current and past West Lane residents Sally Spaulding, Pat Gill, Judy Hays-Eberts, Guy Lundy, Terry Brooke, Carolyn Carney and the late Janet Romanek, Reneé Dodds, June Wyant, and Paul Cass. Selections have also been chosen by Jessie Stinson and Jean-Marie Purcell, as well.

We have quite a few new contributors for 2018, too. I have no doubt that you’ll be quite impressed by the quality of talent demonstrated by local authors and poets who share their work with us each year.