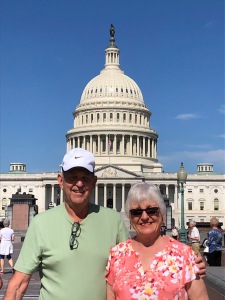 I am heartbroken. The attack on the United States Capitol building and members of our House of Representatives and Senate was too fresh for me to write about last week. As I watched the horrible attack unfold, besides being heartbroken, I was furious that something like this was happening in our country by our own citizens. At the same time, I knew that people close to me—good friends, and even, some family members—supported, and still support, the reasons behind it. I doubt that any of them, except one, support the violence and mob destruction of one of our most beloved institutions and the democracy that it stands for, but several continue to support our twice-impeached President who incited the violent attack.

One of my extended family members, who lives out of state, belongs to a far-right extremist group, but the others I speak of would never take part in the violence and destruction that occurred on January 6. For years, most of them have listened to the “conspiracy teachings” of the far-right media and social media rants. Their rhetoric seems almost scripted.

I have long been just a bit more conservative than liberal in my own heart, but I feared the sharp right turn that the Republican Party took over four years ago. It left me—I didn’t leave it.

I am aware of some of the basic concerns the “non-radical” conservatives hold that have caused them to doubt the path our country is on. I don’t agree with some of those concerns, but I truly believe that they love our country as much as I do. Most believe that some of their freedoms are being taken away. They fear too much government and what they are labeling as socialism by the far left. I also believe that those who are much more liberal need to adjust some of their own behaviors to win these people back to the conference table.

We are going to be a divided nation until we can learn how to talk to each other. In the meantime, I’m praying that all extremist groups can be overwhelmed and dealt with by those of us who despise what happened on January 6. I want my friends back; I want all of my family back. I don’t want to leave our grandchildren and great-grandchildren this kind of legacy.

May God Bless America and may our hearts, minds and souls be healed before my time on earth is done.