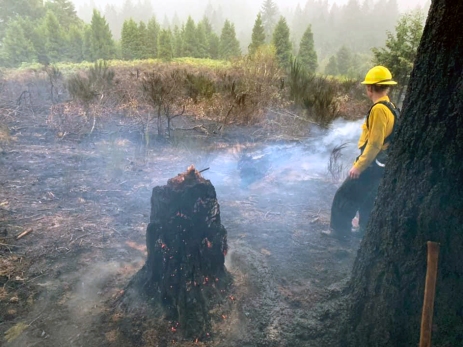 Lorane firefightere, Pete Kersgaard, viewing the aftermath of the wildfire that burned between Carpenter’s-By-Pass and Territorial Roads. Photo by Shane Kronberger

Our community dodged another wildfire bullet again this week. At about 4:00 p.m. last Wednesday, September 23, high winds developed in our area. Apparently, a tree, located on private property situated between south Territorial and Carpenter’s By-Pass roads fell on some power lines which ignited a fire that quickly began to spread. Many of us were glued to the Lorane Facebook page and the various fire alert websites to get updated information as it happened. Neighbors close to the fire began loading their horses and livestock into trailers in case they needed to quickly move out of the way of the blaze which the winds were blowing towards Territorial. The fear was palpable, but soon, fire vehicles and Bruce McDonald’s big CAT which has already seen a lot of use in local fires, were seen heading for the site. Shortly afterwards, reports and photos of helicopters with buckets of water were seen flying over the community and we all rejoiced. Prayers went out on-line for rain which was already showing up as sprinkles coming from the west. Within minutes, reports began showing up that the rain had hit the area as a steady downpour. Although the fear was still present, we all began to feel that this was one battle that we were not going to lose. 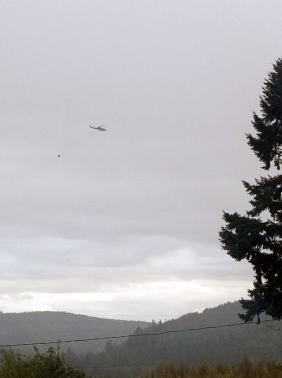 Helicopter with bucket of water heading for the Lorane wildfire on September 23, 2020. Photo by Jessica Betts

During the duration of the fire, the administrators of the Lorane, Oregon Facebook page were busily manning the page in order to give family members of area residents and neighboring communities permission to join the page so that they could follow the progression.

“With the help of North Douglas, Lane Fire Authority, ODF, air support and good ole Oregon rain, we were able to get a good knock down. (The) last unofficial estimate is around 10-15 acres in size. ODF will stay on scene mopping up hot spots overnight and possibly into tomorrow. We also have a dozer on site to create a fire line around the perimeter. Thank you to all of our supporting agencies for the quick response.”

The community was especially vocal in posting thanks to all who worked so hard to protect us. These thanks included in the many posts the following morning can be summed up by Karen Pidgeon.

“Heartfelt thanks to all who helped get the fire out, and everyone for their communications. After the weeks of fires and smoke and worry, this was a huge fear for everyone out here… so thankful for such a great community!”

Thank you, LRFPD and all those who helped with the fire, for taking such good care of us! It was a pretty scary time and we are so thankful that so many were prepared and able to get this fire out before it got started. Mother Nature was definitely on our side last night, too, but you are all our heroes.