Jim and I had a wonderful visit with our daughter Kelly and her husband Justin Fontaine last week. We ate entirely too much food, visited beautiful Sedona, Arizona and took lots of long walks with Frankie, their wonderfully happy (and blind) Jack Russell terrier. The whole time that Jim spent on the couch, watching games on TV, he had a devoted Max, Frankie’s “brother,” by his side. It was a fun, relaxing, much-needed break from the Oregon rain and snow for us.

While we were gone, the Lane County Board of Commissioners approved the Jurisdictional Transfer of Territorial Highway (Oregon Route 200) from ODOT to Lane County, meaning that the proposed realignment and upgrade of the section of Territorial between Gillespie Corners and Lorane will most likely be happening within the next 2 years. 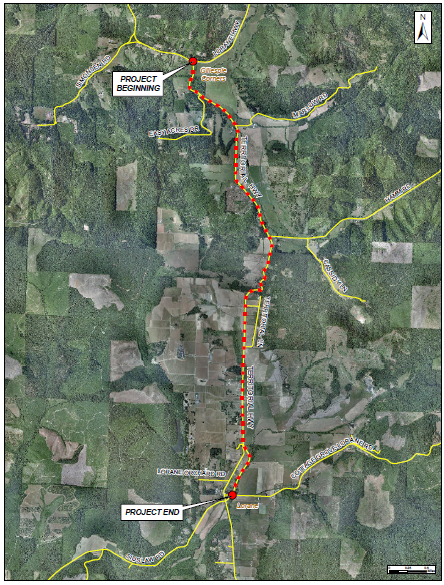 The day after we returned from Arizona, I attended the Celebration of Life for Sandra Larson, Veneta’s former mayor and good friend. There was a large turnout of family, friends and neighbors who came to honor her. The program began and ended with the Presentation and Retiring of the Colors by members of the Lane County Sheriff’s Color Guard in full regalia. The list of speakers included the City of Veneta and Fern Ridge School District officials, mayors for neighboring communities, a representative of the Lane County Board of Commissioners and a friend and neighbor.

Sandy would have been touched by the love and respect shown to her memory.

The Lane Pomona Grange’s Prime Rib Dinner fundraiser to raise money for scholarships offered to youth throughout Lane County was postponed, due to inclement weather, from its original February 9 date to Saturday, March 16, at 5:00 p.m. at the Dorena Grange near Cottage Grove. It will include not only dinner, but music and a silent auction as well. A list of items and gift certificates donated by local businesses and Grange members for the silent auction can be found on most community Facebook pages, including Lorane’s. I’ve been asked to donate some of my books for the auction as well.

The next Lorane Grange Spaghetti Dinner and Bingo Night is scheduled for February 23 starting at 5:30 p.m. for dinner and 6:30 p.m. for bingo. There was a big jackpot winner at the January event and a bigger-than-usual attendance that night, too, adding to the coffers the Grange depends on for the continuing maintenance of the much-used building and grounds. Join us again for good food, family fun and a bit of an adrenalin rush whenever you’re able to yell, “Bingo!”

Remember, too, that the Crow Grange holds a similar night twice a month during the school year on the 1st and 3rd Saturdays of each month. (Dinner begins at 6:00 p.m. and bingo at 7:00 p.m.)