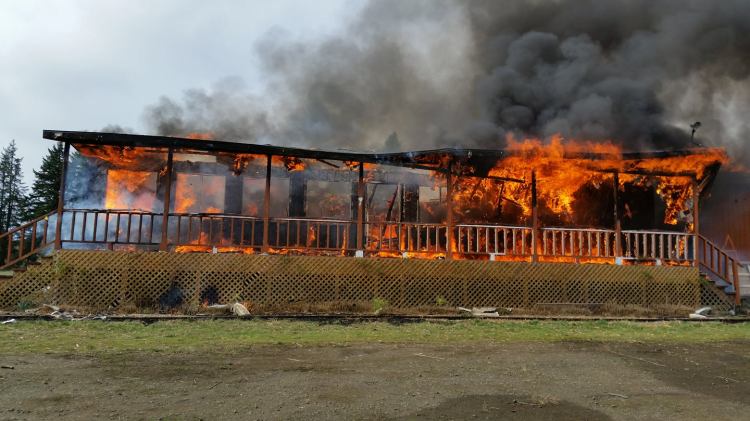 Goodbye to the Lorane Country Cafe. Thanks for the memories!

We had a major event take place in Lorane this past week. We said goodbye to a piece of Lorane’s recent history when the Lorane Country Café was used for a practice burn by the Lorane and South Lane fire departments. I think that most agreed that although it was sad for those of us who have such good memories of stopping by for a delicious meal, usually cooked by Bette Giles or her son Dale, it was time. It had sat vacant for several years now, only being used occasionally by a private individual. Then the property was sold to Brian and Doug Coombs and veteran brewer, Matt Van Wyk of Alesong Brewing and Blending who built a nice new brew-pub building on the hillside above it. The café was deteriorating rapidly and when representatives of the fire groups contacted Alesong about using it for a practice burn, the owners felt it was the best option. In doing so, it provided the Lorane and South Lane Fire Departments much-needed practice on procedures they may face in real-life situations. There are pictures of the burn posted to the Lorane, Oregon Facebook page. Thank you to the participants for giving its demise a sense of purpose. 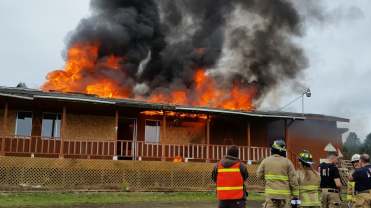 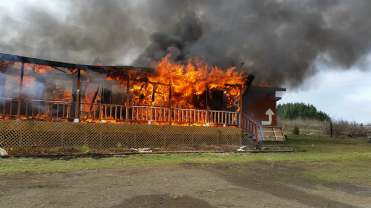 Mark your calendars: The Crow Booster Club is having a Bingo and Soup Dinner Fundraiser at 5:00 p.m. on Saturday, March 10. Everyone is invited to attend.

A Little Bit of Lorane History: Lorane Country Café (written in 2006)
After seven long years of working after work and on weekends, Dale and Bette Giles opened the doors of their new restaurant, the Lorane Country Cafe. They located it next to their home and adjacent to the entrance to King Estate Winery on North Territorial Road. The property that had at one time been part of Bette’s family’s homestead. Dale had always promised Bette that someday he would build her a restaurant if she would run it and after moving back to Lorane from Alaska in 1979, they began the fulfillment of that promise. The bright and airy building seated 45 patrons and the full set of windows on the front overlooked fields and vineyards. They catered to local patrons who preferred good basic foods and in doing so, attracted others from Eugene, Cottage Grove, Veneta and other parts of Oregon looking for a good meal in a beautiful setting. They offered 3 daily specials and homemade pies, biscuits and soups. It was always difficult to find help at the store because of the rural location. Bette employed local people and in the summers she hired high school students. But she always believed that it is important for teenagers to participate in school activities during the school year. In an article for the Lane Electric Ruralite, Bette was quoted as saying, “I hate to see them tied up with work. Their high school years should be a special time in their lives. There is lots of time left for work.”

The Giles ran the restaurant for 17 years with the help of their two sons, Dale “Ben” and David, and their daughter Deeann Giles Brewer and eventually closed it in 2003 after not being able to find a buyer. In 2005, Richard Boyles purchased the land and building and at this writing, it is standing vacant, awaiting a new infusion of life. The Giles sold their home and other property at the same time and moved to Arizona where they have chosen to retire. Their daughter Deeann Brewer remains in Lorane with her husband Jeff and son Christopher Davis Brewer, and Dale, Jr. is currently living in Lake Havasu with his family. Their son, David, passed away in 2008. (From Sawdust and Cider to Wine, 2006)