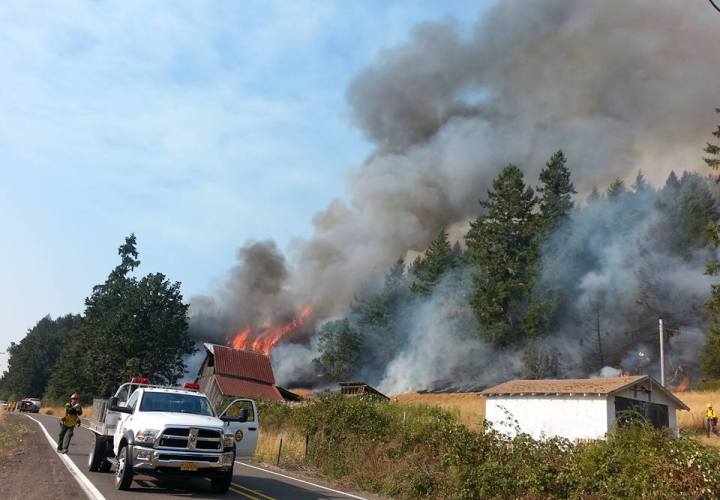 Lorane has been in the news for several days this past week and the wildfire that threatened homes in our area has consumed all of us. Today is Friday, August 14, as I’m writing this. I’ve gone over my deadline, but there was just too much going on with the fire during the past two days that I wasn’t able to focus on writing the column. I am the administrator of the Lorane Facebook page and I was kept constantly busy monitoring it and giving permissions to the 79 new people who requested to join it in order to get the news of the fire and to comment on postings. Also, I wanted to be able to write a happy ending to it for this week’s column.

I’ve waited long enough – our happy ending is in sight, even if the fire has not yet been fully contained at this point. The weather is teasing us with possible rain and a few stray “mistings” this morning. I don’t know if anything will come of it, but it feels good and it has slowed down the progress of the fire, itself. The official word is that it has burned 180 acres and is 70% contained after coming within 75 feet of the Matchulat home, near where it started. Yes, that’s the same Matchulat family that has been mentioned in this column in recent weeks. Fortunately, the Matchulat’s were spending a few quiet days at the beach to rest up from the furious rounds of fundraisers put on to help with son Michael’s medical expenses following a diagnosis of Stage IV colorectal cancer. 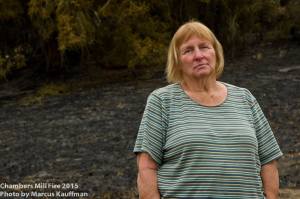 The fire has been determined to be human-caused and started along the roadway on South Territorial Road just north of the Matchulat home. It quickly spread through dry grass and into a group of trees near the home and began racing up the hill next to the house. Lorane resident, Cherie Lutman, called 911 and then made a call to lifetime Lorane resident, Gary Thompson since she couldn’t rouse the Matchulats. Gary and his wife Lil rushed to the blaze and immediately saw that it was heading towards the Matchulat’s house. Gary turned on hoses and climbed to the roof of the house. He and Lil sprayed down everything as they watched the fire get closer and closer. The Lorane Fire Department volunteers and air support were soon there and they began the work of keeping the fire at bay. With the help of others who had arrived, they went inside and collected as many of the Matchulat’s photos and personal items as they could in case they were not able to save the house. Without the Thompsons’ quick 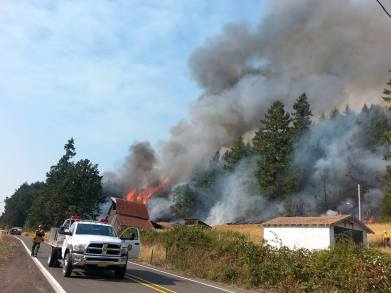 thinking and their concern for their friends and neighbors, that could easily have been the outcome. Fortunately, with the barrage of water dumps from the air and fire hoses on the ground, the fire’s force focused on the trees and the dry grass above the house and the immediate danger was over. But, Gary and Lil and others who had arrived, stayed on the scene to make sure that stray embers from the burgeoning fire did not land on the roof. 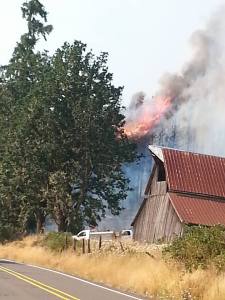 In the meantime, crews from the Western Lane division of the Oregon Department of Forestry began trying to contain the fire. They put out a priority alert and other crews began arriving from as far away as McKenzie and Lowell Fire Districts. Helicopters and air tankers continued dumping water and retardants on the fire. Local resident, Bruce McDonald, and others who had cats and heavy equipment began working on a fire line to try and keep the fire from spreading. The next day, more crews arrived. One of them, in five trucks, pulled into our store parking lot to get supplies before heading for the fire. They had been fighting the large Southern Oregon fire near Glide and their clothes still were fragrant with the smell of smoke. But, they knew that they were needed here, so they came. 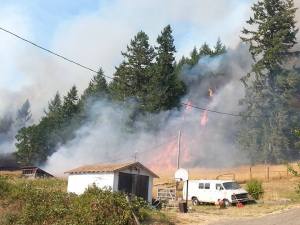 We have a lot of heroes to thank… not only Cherie, Gary, Lil, Bruce and all of the local and out-of-area firefighters, but all of the people who were glued to their computers, reading and commenting on breaking news about the fire… the ones sending prayers and thanks to all who were working so hard to save the lives and homes of our residents. I have a special soft-spot in my heart for those who offered help in the form of providing food and drink for the firefighters, making trailers and transportation available for threatened livestock and beds for anyone who became displaced by the fire. All are heroes in my estimation.

I’m very proud of our community and of all of those who showed their concern. Thank you.