The Lorane community has lost an icon… a piece of our history… in the passing of Walt Hayes on January 13, 2009. Walt, whose family settled in the area in 1897, had roots that went deep into the soil of the valley. Walt’s father, Bert Hayes, who was 13 years old at the time, brought his wheelchair-bound father, James, and his two siblings to the area by wagon train, first settling in the Hadleyville area near Crow. After James died in 1901, the children went to live with various families throughout the area. Bert and his brother Ted were taken in by the Sanderson family of Lorane and Bert later married Roselthe Margaret Harris in 1920. Walt was the third child born to their family of five. 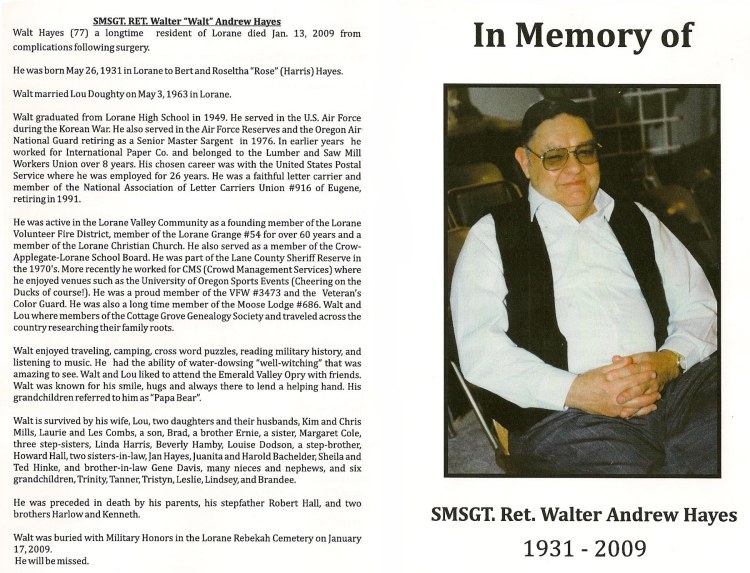 Walt loved telling stories about his heritage. The people who touched his own life and those of his family remained important to him and when Nancy O’Hearn, Marna Hing and I began researching the history of the area, Walt became one of our richest “fonts of knowledge.” He was able to tell us much about the people, with all of their special qualities and quirks and experiences, who once populated the valley; he pointed out where homes, mills and businesses once stood; he told stories that made us laugh and cry, bringing to life, once more, the people and the way of life that came before us. We learned what a fun-loving character Frank Davis was – how he taught the fine art of spitball making to the local boys during church and how he frequently became the focus of their pranks, especially around Halloween. Walt told about his mother, Rose Harris Hayes, and the special love he had for her. We learned about the farming practices of the old Lorane Orchards and how local people, young and old, were employed in planting, caring for and harvesting the pears, apples and plums that grew on the 1,800 acres where King Estate Winery now sits.

Walt and his wife, LouDell, whose family were also pioneers in the area, complimented each other. They shared an interest in their community and were both extremely active in various organizations – Lorane Grange, Lorane Christian Church, Lorane Volunteer Fire Department, Lorane P.T.C., Crow-Applegate-School Board, the Lorane “Old-Timers’ Picnic,” and 4-H, to name a few. Their children, Kim, Laurie and Brad, were raised by loving parents who took an active interest in them.

Walt had a special gift, too. He was a “water-witcher.” He helped local people find underground water supplies into which they could sink wells for their homes. Walt never knew just how to explain how the “witching” worked. He thought it had something to do with magnetic energy… maybe… but it did work for him. And, water was not the only thing that he was able to find with his devining rods. In later years, he found that he was able to locate graves in the Grange Cemetery that no longer had headstones. I watched him demonstrate this not too long ago… last August, as a matter of fact.

Twenty-three members of the Jost and Jerusha Petrie family contacted me about coming to Lorane to visit their ancestors’ gravesites and to see where they had once lived in the late 1800s and early 1900s. They were coming from Wisconsin, New York, Chicago and California to a wedding in Portland and planned to drive down to Lorane the next day. I asked Walt if he would be willing to be their tour guide. At first, he was afraid that he couldn’t… that he had some previous plans for that day… but I found out later, that he cancelled his plans to spend the day with the Petries, much to Lou’s frustration! We all met that morning at the Lorane Grange Cemetery and Walt showed us the large obelisk headstone marking the graves of Jost and Jerusha. I explained to the Petries that Walt was able to “witch” gravesites and had done so as a project for the Cottage Grove Genealogy Society so that they could map and mark the graves there. He agreed to give them a demonstration. As Walt walked across areas of ground near the headstone with his “L-shaped” devining rods in each hand, they pointed straight ahead, but as soon as he began to cross over one of the graves, they slowly began turning inward towards each other, crossing into an “X-shape.” He did it time and again while the family members watched in astonishment. Soon several of the Petries asked to try their hand at witching.

Most were met with failure, but one sister-in-law from New York, as she walked across a grave discovered that she had “the gift,” as well. The rods slowly crossed in her hands and as she got on the other side, they went back to their original position. This became one of the highlights of their visit, I later learned. Walt spent the whole day with the family. They treated him to lunch at King Estate and he went with them to look over the land where Jost and Jerusha once lived. Thanks to Walt, the Petrie family was able to touch their roots that day. I understand that they have expressed their sympathy and deep respect for Walt in letters to Lou when I notified them of his passing.

There will never be another Walt Hayes. We were only able to record a minute number of his stories in our book Sawdust and Cider; A History of Lorane, Oregon and the Siuslaw Valley, but I am so thankful that we were able to get the ones that we did. Many stories died with Walt, but he was able to help us open the door to Lorane’s past, and thanks to him, that special part of the past will never die.