Lloyd Counts: A Silence is Broken

In 1945, when he returned home to Lorane, Oregon following World War II, Lloyd Counts tried to tuck the memories of the preceding five years into the past. For the most part, he succeeded. He had a new wife at home, a house to build and a family to start, so the process of living took precedence and overshadowed those five years with the U.S. Army. But, the memories remained and would surface occasionally. When asked about his experiences during the War, he said little, keeping the memories close inside, not wanting to share them with others. It was his feeling that what he did was such a minute part of the effort, that by talking about it, he would make his role seem so much more than he felt it was. Besides… many of the memories hurt.

The older he became, however, the more Lloyd wanted to share some of his experiences with the younger generations. He felt that his experiences and those like his should be told. After becoming quite upset at recent claims in the news that the Holocaust never happened, Lloyd knew that it was time to tell his story. He approached me at Lorane’s Old-Timer’s Picnic in August 2008, asking if I would be willing to record his memories. I agreed, but it wasn’t until the following February when I finally sat down with him in his home in Lorane.

In 1939, before the U.S. entered the War, Lloyd enlisted in the U.S. Army and was sent to Panama. He joined the 82nd Coast Artillery, an anti-aircraft unit that set up guns in the jungle in case enemy planes should pass by on the way to the United States. Fortunately, the guns in Panama were silent while he was there. Lloyd was stationed there when Pearl Harbor was attacked and after four years, he was furloughed back to the United States where he married his childhood sweetheart, Estelle Mitchell.

Soon after their wedding, Lloyd was sent to Texas and then Mississippi where he joined the 861st Artillery Battalion at Camp Van Dorn, Mississippi. From there, he was sent to New Jersey where his unit boarded the U.S.S. Washington, a former civilian vessel that had been converted to a troop transport. On board the ship, he was reunited with a former classmate from Lorane High School. Russell Hensley was a sailor with the U.S. Navy at the time and served onboard the ship. He had been to Australia on a previous voyage and presented Lloyd with a sheepskin vest he had obtained while there. Lloyd said that there were many times when that vest kept him warm and protected in cold weather.

The U.S.S. Washington sailed for Europe with troop members crowded into bunks stacked so closely that their noses almost touched the bunk above them. Lloyd was assigned dreaded KP duty, but Russell interceded and got him a job directing traffic on board the ship.

When they arrived in Marseilles, France, Lloyd joined the 105th Field Artillery Cannon Outfit as a gunner. He and others in his unit hauled the huge, heavy cannons and equipment to the top of hills behind Marseilles where they had to clean off the cosmoline that was liberally smeared on the metal to prevent rust before the guns could be fired.

Shortly thereafter, however, Lloyd joined the “Champagne Campaign,” laying communication lines through the wine country of France and Germany. There were no cell phones in those days. Lines connected the forward observers to the division leaders so that they could report what was ahead. There were occasional skirmishes along the way, but it was at what was called the Siegfried Line along the border of France and Germany where Lloyd obtained first-hand experience with the horror of war. The Siegfried line was a 390-mile defense system built by Hitler on the western border of Germany. It was lined with over 18,000 bunkers, tunnels and tank traps. At 1:00 a.m., with a one-mile reel of wire on his back, Lloyd set out with the infantry he was with to traverse a main crossroad to lay line. They made it across and laid the line, but ran into trouble on the way back. There was a lot of ground fog that night and for the purpose of “blinding” the enemy to the return crossing, bright, 4 million-candle power searchlights, were directed toward the sky. Instead of blinding the enemy, however, they highlighted their own position and huge exploding shells rained down upon them. Lloyd and another man were riding on the fender of a Jeep when the percussion of one of the shells sent them flying in two different directions. Fortunately, neither of them were badly hurt, but Lloyd sustained a piece of shrapnel in his leg. The difficulty of the assignment and the ensuing skirmish earned Lloyd a Bronze Star that night.

As Lloyd’s unit advanced across Germany, they saw more and more signs of Hitler’s horrific reign. His treatment of the Jews, especially, was there for all to see. Lloyd paused in his story at this point, struggling to regain his composure… it was obviously extremely difficult for him to continue. But, this was the story he felt he needed to tell…

“I saw more dead bodies than I ever thought I would see. There were places where we came upon huge piles of bodies waiting to be incinerated. Most had been starved and worked to death. One day, several men from our unit went to a railroad siding close by to view at least 50 boxcars crammed with more dead bodies of Jews. I didn’t go with them – I had seen many more than I ever wanted to see.”

One day, they came upon a concentration camp filled with Polish citizens who had been there for over four years. He remembers the people in the camp watching the soldiers as they ate and afterwards they began digging through the garbage for any remains of food that they could find to eat. When the soldiers realized these people were starving, they gathered together as many mess kits as they could to give to them. After they left, the prisoners were freed from their captors by the troops that followed.

Occasionally, they came across other camps of forced laborers. Even though they had been left to fend for themselves, the people of the camps would not leave because of their fear that the Germans would return to punish them. The Holocaust was, indeed, real.

Lloyd was one of the first ones to enter and occupy the German city of Heidelberg. He had to string the phone wire high on the buildings to prevent them from being damaged on the street by tanks and other vehicles. The accompanying picture of Lloyd in the foreground shows welcoming civilians and white flags of surrender on the buildings. Two men standing in the background were probably German soldiers in disguise, according to Lloyd.

As they got deeper into the German countryside, they came across the vast and sturdy autobahn highways that served as landing strips for the first jet aircraft that Lloyd had ever seen. The centers of the autobahns were painted green and maintenance shops for the aircraft lined the road under the shelter of trees.

Lloyd’s trek across France and Germany took 6 months. His tour of duty ended in 1945 at the Danube River when the Armistice was signed and his division was pulled out. Lloyd was one of the first ones sent home to rebuild his life with Estelle about three weeks later.

Lloyd sums up his experience haltingly. “Fighting a war is a team situation… everyone does his part… even those who stay home. I wouldn’t recommend any of the things I did to others, but young people should take notice of the stories that we are telling. Our experiences should be recorded and remembered so that hopefully, someday they won’t have to be repeated.” 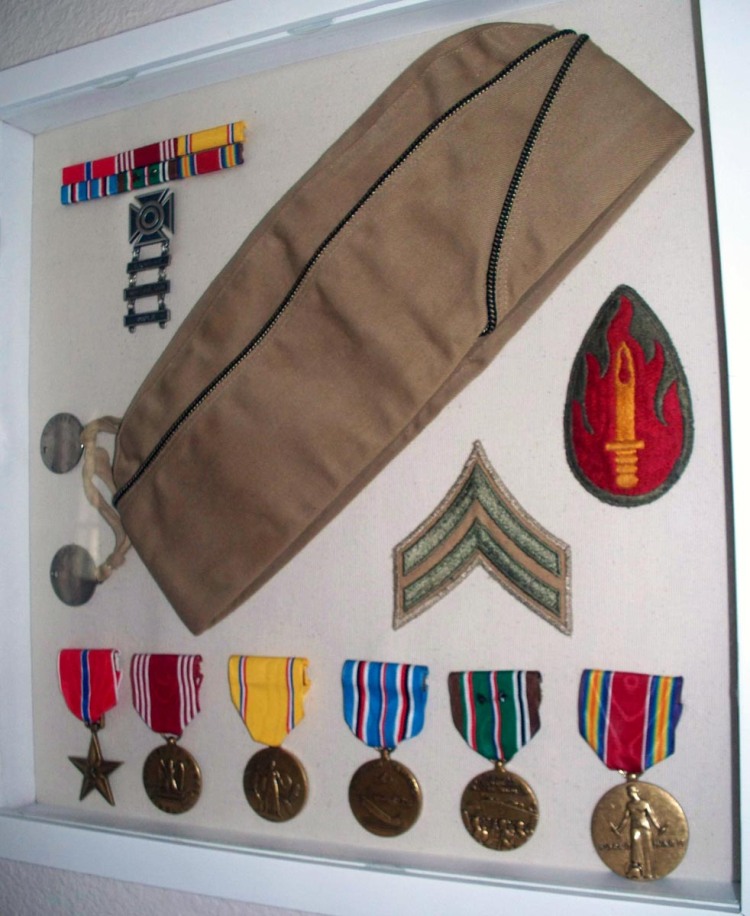 Lloyd missed the ceremony in Germany after the war when medals and ribbons were handed out. His military records were lost in a fire at the National Personnel Records Center in St. Louis, Missouri in 1973, so it was only through diligent effort on the part of his daughter, Vicki, that he was finally awarded his medals in 2008 – 63 years after he returned from Europe. In addition, he was able to obtain the Heidelberg picture from the archives of his division only a few months before our interview.