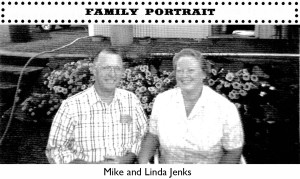 By Pat Edwards (from The Lorane Historian; Volume 1 Issue 2; November 1993)

Mike and Linda Jenks have some advice for new people moving into the community who want to meet their neighbors but don’t quite know how…invite them to a field fire! About 2 days after moving to Lorane 23 years ago, a horse knocked over their electric fence, starting a grass field fire. A telephone installer spotted the fire and called it in. Their neighbor, Mark Annett, arrived to help, followed closely by a Western Lane truck being driven by Jim Rothauge. Joe Brewer soon arrived to disk a fire break around the fire, and others pitched in to extinguish it before it got out of control. The Jenks took some good-natured teasing from people in the community who claimed that they probably started the fire in order to get to know their neighbors. Linda is quick to point out that “we learned quickly how the neighbors in Lorane pitch in to help each other in times of need. This hasn’t changed.”

Mike and Linda (Bartgis) Jenks were both born in California…he in Long Beach and she in Los Angeles. They were married in 1962 in Downey, California. Mike had just been discharged from the U.S. Navy when he was offered training and a job with IBM. They lived in California for the first seven years of their marriage while being transferred for several months at a time to a variety of locations during Mike’s training period. He attended IBM schooling in San Jose, California, Rochester, Minnesota, and Poughkeepsie and Kingston, New York while they lived in Saugerties and Wappingers Falls, New York, respectively.

During that time, two children were born to them. Colleen, age 30, was born in Downey. She is now in her 9th year of teaching high school English after graduating from Oregon State University. She is currently at Wahtonka High School in The Dalles.

Mark, age 27, was born in Kingston, New York. He is presently a Captain in the U.S. Air Force stationed at Wright-Patterson Air Force Base in Ohio. He also graduated from Oregon State University where he had an ROTC scholarship.

They eventually moved from California to Longmont, Colorado where Mike was transferred. They lived there for a year. According to Linda, “we were in Colorado when IBM was ready to send us back to the Los Angeles area. We had always wanted to live in a small rural community.” Mike and Mark travelled to Oregon to check out a position that was open with IBM in Salem. What they saw, they liked. When Mike applied for a transfer to Oregon, he was awarded a position in Eugene where he worked until his retirement in 1991.

“We arrived in Eugene on the 6th day of July, 1970, and started looking for a house with some acreage. We looked at about four farms around the area, and after eight days, put our earnest money on the Brewer’s 65-acre farm on south Territorial Road, says Mike.” (The house that they chose for their future home was built by the Addison family over 100 years ago. More of its history can be found in Sawdust & Cider; A History of Lorane, Oregon and the Siuslaw Valley.) “We didn’t really know anything about the area or the people, but we did like the house and land. After looking back on the 23 years that we have lived here, we don’t think there is any place in Oregon that we would rather live than Lorane.”

Mike laughs when he tells of the day that he and Linda placed their earnest money down on the farm. After leaving, they talked of how beautiful the house was and that the white picket fence around the front yard really set it off. When they went back to see it the next day, they discovered that there never was a white picket fence at all. “Oh, how the mind can play tricks on you!”

After they settled in Lorane, another child arrived. Ewing was born in the Cottage Grove Hospital almost 22 years ago. He is presently attending his 4th year of college classes at Oregon State University. (The Jenks raised a family of Beavers!) All three of their children graduated from Crow High School where Colleen was valedictorian and Mark the salutatorian of their classes.

Mike is now retired from IBM and is a full-time farmer. (Neither he or Linda believe that “retired” is an appropriate word to describe him.) He had a variety of jobs before his stint in the Navy including newspaper boy and working in the oil fields. He’s presently a volunteer fireman and enjoys such hobbies as metal working, computers (naturally), photography, electronics, woodworking, and farming.

Linda has been a homemaker since Colleen was born. Before that, she was a registered nurse. Linda loves teaching “Bible Club” Release-Time to Grades K-3, and has been teaching it for over 15 years. She says, “It isn’t long compared to the many years that Lorena Mitchell, who teaches the upper grades, has been teaching!” Another thing that Linda loves is doing all kinds of handwork. Her specialty is tatting and she has adorned some beautiful pieces with it. Linda also headed the Lorane Centennial quilt project, and it was mainly through her efforts and supervision that the community quilt became a reality. She also loves to garden and has a large vegetable and flower garden to tend.

Both Mike and Linda are long-time members of the Lorane Grange. In the past, they have been actively involved in Lorane P.T.C., Lorane 4-H, Crow High School Booster Club, and the Lorane Centennial Committee, as well.

Linda said, “As you can see by where we have lived, we have traveled across the U.S.A. a few times! The most fun that we have had was on vacation one summer in a houseboat with my parents on the Sacramento River. Michael was always doing things to keep it lively–like throwing mops overboard and almost getting us run down by a freighter.” Their last family vacation consisted of camping out in tents for 3 weeks while visiting friends on a dairy farm in Wisconsin.

The Jenks are the type of family that represent the backbone of the Lorane community. Whenever there is an activity that requires community participation, they are always there. Whenever there is a community need, they are willing to contribute. They are always busy, but never too busy to give of themselves. It’s that willingness on the part of families like the Jenks that make Lorane the special place that it is.