The Wonder of It All… Zebrafish Research: A Clear View of Life’s Beginnings 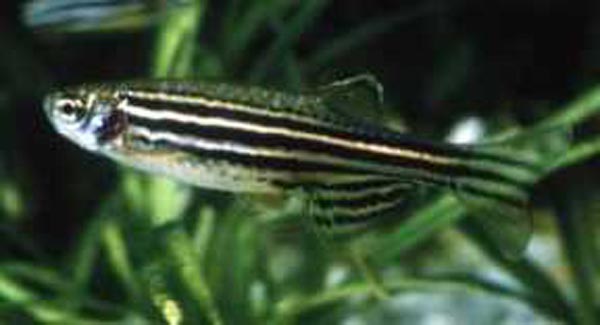 Through the lens of the microscope, the crystal-clear egg with its single cell sitting on top of the yolk sac, looks like the fringed bald pate of a monk. Before watching eyes, it begins to divide. In a little over an hour, its eight cells resemble the ruffled comb of a chicken. In two hours’ time, there are 64 cells, and at three hours, 1,000 cells sit tightly clustered together. By the 9th hour, a body begins to take shape, wrapped around the circular shape of the yolk sac, tip of tail nearly touching top of head. By the 17th hour, the tightly curled embryo begins to open like the blossom of a flower. At the 30th hour, the huge unseeing eyes are visible in the massive head. As each hour passes, the embryo’s body begins to straighten more and more and takes on the characteristics of a fish. Soon, a mere three days later, the wriggling, live zebrafish is ready to begin life in its aquatic environment.

During the early stages of development, dye can be injected into a single cell. As it divides, the cell’s “daughters” also bear the mark of the dye and with the help of a microscope, their migration paths can be traced to where they are destined to grow. But, is that destiny, or fate, determined by the cell’s ancestry or by its environment? What would happen, for instance, if the normal migration path is blocked? Will the cell’s migration take a detour and arrive at the predestined point? Or will it veer off in a completely different and unscheduled direction? What happens if the “mother” cell is moved to a different location before it begins dividing?

This type of research is described as a quest to discover whether cells in an embryo follow the “European” or “American” plan of development. If cells follow the European plan, their fate is determined by their ancestry – whether their mothers and fathers were kings and queens.

If they follow the American plan, however, their fate is, in large part, a result of environmental factors. Their destiny is determined not by their lineage but by changes that occur in their environment These are some of the questions that are being asked and answered in the study of the “hottest” new model in current developmental research, the common, ordinary, home-aquarium-variety of tropical fish, Danio rerio, or zebrafish. And, for those whose curiosity has been piqued, the answer to the cell-tracking question relating to the European vs American plans described above has now been proven… the correct answer is the American plan.

I became indirectly involved in zebrafish research a few years after I was hired in 1989 by the Institute of Neuroscience at the University of Oregon as their secretary. Five scientists connected with ION began a collaboration in the study of the developmental biology and genetics of the lowly little zebrafish. They asked me to work directly with them as their secretary. Their predecessor, a molecular biologist at the UO, Dr. George Streisinger , is considered by many of his peers to be the founding father of zebrafish research. As a fish hobbyist who knew how easy it was to raise and maintain zebrafish, he began using it as a model system. The fish was small enough to keep the large numbers required for genetic studies, but large enough to do classical embryological manipulations such as transplantations. Before his death in 1984, he had published a paper on his work in a major scientific journal and the seeds of his research began to sprout throughout the world. By the time that I retired from my position as the administrative coordinator for the International Zebrafish Research Community in 2004, there were hundreds of major labs around the world using the zebrafish for developmental biology and genetics studies.

The group of scientists who hired me included Dr. Charles Kimmel, a developmental biologist who had worked directly with George Streisinger. He was a winner of the prestigious American Association for the Advancement of Science Fellowship award for his work in establishing the zebrafish as a model for mammalian development; Dr. Monte Westerfield, who designed and maintains a vast on-line database to collect the findings of the international labs and who was instrumental in overseeing the construction and maintenance of an ultra-modern zebrafish breeding facility at the UO; Dr. John Postlethwait, a renowned geneticist whose lab began work on the zebrafish genome project; Dr. Judith Eisen, a developmental biologist who studies motoneuron development of the zebrafish; and Dr. James A. Weston, who originally studied neural crest development in the mouse and joined forces with the zebrafish group, adding his experience in obtaining and administering its first million dollar program project grant for the collaborative effort. Another of the original researchers in the University of Oregon group was Charline Walker Durchanek, a senior research associate who worked closely with both the Streisinger and the Kimmel labs, discovering many of the zebrafish mutants used worldwide today in the study of birth defects.

Most developmental research has been done using models such as Caenorhabditis elegans, the nematode worm, or Drosophila melanogaster, the fruit fly. But, as valuable as the research on these models has been, they are invertebrates. The results of basic research on the zebrafish, a vertebrate, can relate much more closely to more complex vertebrate systems including humans. One of its eventual implications for humans is a possible means of finding ways to prevent birth defects. And, unlike other mammals that develop within their mothers’ bodies, the live, developing zebrafish embryo can be viewed under a microscope.

Even though this is a study on zebrafish, it’s a simple model for humans. Because of the complexity and danger of studying live human embryos, scientists are always looking for a way to use simpler models. Mice have long been used, but like many mammals, the forming babies are encased in the womb of their mothers and are difficult to study while they are actually living and developing.

According to Dr. Charles Kimmel, “Fish and mammals are ancient relatives, having evolved from a common ancestor. Most vertebrate embryos are strikingly similar in their early stages. Though there are different body parts between a fish and a mouse, you find a lot of their genes are similar, thanks to that common ancestor.”

At the teaching level, high school and community college science instructors are beginning to discover the benefits of using zebrafish in genetics and development projects in their classrooms. Many valuable lessons can be learned from actually watching an embryo develop and grow from a single cell into a mature adult.

My experience working with these pathfinders was humbling. Before being hired at the UO, I had no background in science, no experience with international relations. During my 15 years at the University of Oregon, I met and became friends with scientists all over the world. They are a wonderfully diverse group of people working together toward a goal of understanding not only fish development and genetics, but that of humans, as well. These scientists opened the international doors of respect and friendship to me. I traveled to scientific conferences at Cold Spring Harbor, New York and coordinated conferences closer to home; I helped put together the multi-million dollar grants that still fund this research today. I feel so fortunate to have taken even a minute part in what I am sure will someday be major medical breakthroughs by these dedicated scientists.

I’ve learned that science is not only knowledge. True science, stripped down to its basics, is the pursuit of answers to questions. In the study of biology, those questions must originate in the very beginnings of life. Technology is providing better and more precise equipment to seek the answers, but Mother Nature must provide those life beginnings in a form that can be studied. In the zebrafish, she has offered a most perfect specimen.

And because of the common, ordinary, home-aquarium-variety of tropical fish, Danio rerio, humankind may someday benefit.